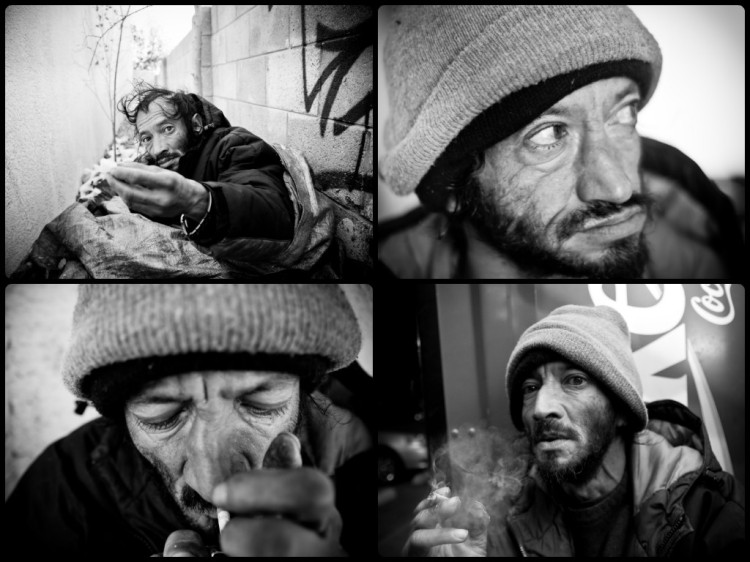 A paragraph is sometimes insufficient to honor a man, so herego.

Fourteen years ago, just having spent my last dollars on a Limousine Express from Juarez to Albuquerque, I sat down on a bus stop bench at sundown on Central and 12th Street, aimed uptown towards the university.  A creepy pimp with the countenance and charm of Eazy-E sat beside me and said, “boy, you look like you could do to make some money tonight.”

Boy, he was right.  I had not eaten a meal in two and half days. I was completely broke, but for a few small coins—some pesos, some dimes—in my back pocket.   But this homage is not for the pimp who kindly paid my first bus fare and offered me a job “partying with hot older women” (save this for another time).  It is, rather, a continuation of the last post, an ode to the straggly-haired, mouse-faced, and tenderest of hearts who was waiting for me just a few minutes later in front of the Frontier Restaurant at Central and Cornell: “Hey, you got any change, bro?”  I did, and since its pithy jingle only made me feel worse about my woeful pauperism, I gave it to him.

In those days, Johnny Romero slept and roamed in and around the campus of UNM.  He was among the group of squatters residing in the rafters at the Student Union Building, who were later expelled when the scandal blew up.  Then he was kicked off the university campus altogether—perhaps a dozen times, before the campus police realized they would have to monitor him constantly, lest he sneak back in to charm young change-toting students.

In the end, he surrendered campus, retreating strategically to the surrounding “student ghetto” south thereof.  The college students and other penniless ragtags typical of the area tended to love and care for the meek and mild homeless man.  He always asked for change, but never demanded or acted aggressively.  And it was never a problem if you had none to offer.  He would simply thank you and move on, or stand and chat for awhile, inquiring politely as to the welfare of your best friends or your far-off family.

He could be quite chivalrous, too.  A dear friend of mine, a Spanish woman named Alicia, was getting her master’s degree and lived in the student ghetto.  Her classes often got out late, and she would have to walk home alone through the dark streets south of campus.  Those were the days of the notorious “Ether Man” and the “Southside Rapist,” both of whom were active in the area.  Johnny, the unassuming peddler, walked her home from class nearly every night to make sure she was safe.  Not for change, but for simple, perhaps even thoughtless, consideration.

But if students and ragtags liked the hapless Johnny, a number of local business owners felt strongly otherwise, and they called on the institutions of the state to guarantee the constitutional protections of private property.  Within a few years, and after so many beatings and brief stints in jail for trespassing, Johnny abandoned the neighborhood.  Believing that an official court order made it illegal for him to set foot in 87106, he marched on, from zip code to zip code, knowing no other life than that of an endlessly wandering pan handler.  He moved to Nob Hill, and another “court order” banned him from those public spaces.  He moved on, then, to an alleyway near the corner of Girard and Indian School, and there lasted a few years.  But when a sympathetic businessman passed away, and his daughter inherited his failing enterprise, the state was called upon again to remove the stinky man and his wad of sleeping gear, to be ushered off somewhere new.

It was around that time, in 2010, that I decided to interview him in depth for the first time.  I had just gotten back from a good long trip to Brazil, and felt stunned by his appearance.  Johnny was getting old, physically speaking.  He is only 46 years old today, but a life on the streets has aged him twenty years beyond.  His youthfulness seemed to have disappeared, his wrinkles deeper and dirtier, his gate more bent and drawn, a sadness in his stare I had not seen before.  It was common for me not to see him for months at a time, and at once I realized that if he were to at some point die and pass on to other worlds, I might never know.  And please understand that in 2010, noticing his physical decrepitude for the first time, I feared he might actually be dying.  And so I found him, spent a few days with him, talking of his life, his whereabouts, and his goals.

It was noon on Thanks Giving day, and the year’s first snowfall lay in a fluffy thin layer over a blue tarp in a narrow alley.  Snores and grumpy moans rumbled underneath.   Johnny wanted to stay in bed, but I said no.  We had a free holiday feast on which to stuff ourselves at the nearby Mennonite Church, and with my own family being so far away, I was not going to miss it.  Begrudgingly, he sat up, brushed the snow out of his hair, and prepared himself to face a brand new day.  And alongside the kind Mennonites of Albuquerque, we filled ourselves with innumerous courses of hot steamy soul food.  It turned out to be a delightful day of grace.

Between chomps and chews, Johnny spoke of his life.  He had grown up in the East San Jose neighborhood, just south of what the hip now call “EDO.”  In the 1970s and 1980s it was a bloody battleground of gang rivalry and small time drug dealing.  Heroin had wiped out the remnants of the Chicano movement, as Hispanic youth fell to addiction and the extreme violence of an unregulated market.  Gangs fought for turf.  The San Jose gang split into various clicks and factions as its old-tier leadership crumbled under overdoses, eternal prison sentences, and combat with the also deteriorating gangs from Barelas, Martinez Town, Washington Heights, and Wells Park.  In the middle of all this, Johnny and his brother were high school drop-outs living at home with their mother.  She died when he was 24-years old, and the duo began selling marijuana out the back window in order to make the mortgage payments (Johnny never landed a legitimate job).

The brothers did not belong to the local gang, however, and they had not gotten “permission” to sell drugs in the neighborhood.  One day a gangbanger approached the back window pretending to be a customer, and then pulled out a gun.  It was a .22 Caliber pistol, and one of its little lead bullets remains lodged in Johnny’s left calf to this day.  He barely remembers the moment for the adrenalin that catapulted him across the yard and over the fence.  Horrified, he never went back to selling drugs.  He and his brother failed to make the mortgage payments, and the house went into foreclosure.  While his brother left and is now somewhere in Texas, presumably married and raising a family, Johnny has been living on the streets of Albuquerque ever since.

Each time I see him, I sigh something like relief.  He is still alive.  His frail ratty body hunches more each year, his face evermore deeply sunken, his aging skin draped over the contours of his skull and bones.  His nose is broken like a boxer’s.  His left pupil torn from its center by a shard of glass in a fight long ago. His hands black with smut, his hair an eternal catastrophe.  But he is alive.  He was built street tough.  “I haven’t gotten sick in twenty years,” he says.  I can hardly believe it.  I get sick all the time.

6 thoughts on “The Life and Times of “Change Bro””